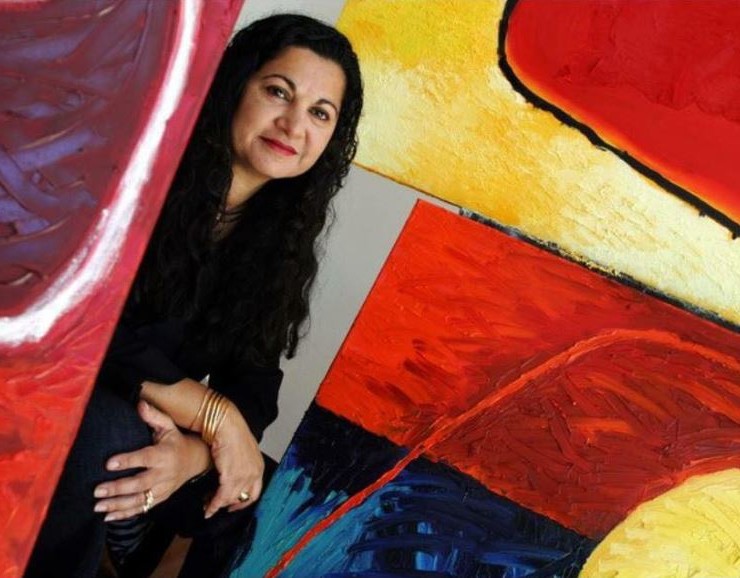 Norma Tahhan is a Sydney based artist who has gained an extensive knowledge of drawing and painting, through various Universities and Colleges. She has undertaken many travels within Australia and abroad for artistic research and this is reflected in her many art works. After numerous exhibitions, including sell out Solo Exhibitions at The Seymour Theatre Centre, The Star, The New England Regional Art Museum and Customs House, it is clear that Tahhan’s artistic practice is dedicated, professional and consistent. Her work has been represented in numerous Private and Corporate Collections throughout Australia, USA, Europe, Lebanon and New Zealand. Tahhan’s work has been featured in many newspapers and publications including The Sydney Morning Herald, Daily Telegraph, Black & White and on television. Tahhan’s work was recently featured in the Channel 9 Mini Series “Bite Club” Her works have also been selected and featured at the Powerhouse Museum, The National Maritime Museum and the Australian Centre of Photography. Norma has been the finalist in numerous Art Prizes and has won the Drummoyne Art Prize 2017 and 2019.

Apart from Norma's highly acclaimed professional artistic career, Norma is also a passionate Art Educator. Norma is a fully qualified Art Teacher and has been an Educator in Art in numerous Schools and Colleges throughout Sydney, NSW Australia. Norma has held numerous leadership roles in Sydney Schools and Colleges and has been a Director of Creative Arts in various Sydney Schools. Norma has over 20 years experience as an Art Educator and holds a Masters in Fine Arts and Visual Arts Education. Norma is currently a Visual Arts Education Officer overseeing Art in over 150 schools across Sydney. Norma is extremely experienced in the current K-12 Visual Arts Curriculum, having written varied programs from Kindergarten to HSC Visual Arts. She has successfully tutored and mentored students from Kindergarten to HSC Visual Arts and being a fully qualified Visual Arts teacher, Norma has been able to assist students with all facets of the current curriculum. HSC Students who have worked under Norma's tuition have been selected for Art Express - a selection of the best works for HSC. Norma is also an Art Therapist and can assist students with Diverse Learning Needs achieve success and fulfilment through Visuals Arts. Gallery NTK supports NDIS. Norma has also successfully facilitated students in portfolio creations for Specialist Art Schools and University. She has enabled one hundred percent of students submitting portfolios achieve success in receiving a place in their chosen school or University course.

In 1999 Norma was invited by New England Regional Art Museum to hold a solo exhibition at the Art Museum. He works were showcased alongside an Exhibition featuring the works of Leonardo Da Vinci. The exhibition ‘Models of genius’ was shown for two months and featured da Vinci's uncanny foretelling of 'modern' innovations such as the Parachute, the Helicopter, the Machine Gun and the Military Tank. It was an honour for Norma to be the only artist selected to be featured as part of the Gallery’s museum program during da Vinci’s exhibition. The models were brought to Australia as a joint venture project between IBM Australia and UTS. Since then the 'Leonardo da Vinci: Models of Genius' exhibition has concluded two successful national tours of Australian technological universities and associated libraries, museums and galleries as well as nine regional galleries and the Singapore Science Centre, delighting and intriguing over 100, 000 visitors.
Norma Tahhan’s personal experience and her love for life materialise in the powerful and dynamic images she creates. Her paintings and drawings are rich and reflect the intensity of her personal experience. Her works are spontaneous and direct. Her initial idea soon unravels to reveal a work embedded in reality. “Reality becomes abstract and abstract becomes reality.” Norma Tahhan totally immerses herself in the creative process, each work becoming an extension of her being. “ My artworks are created through my blood stream – the pulse of my life. I call for the viewer to become a part of this experience.”